What is Bastille Day? 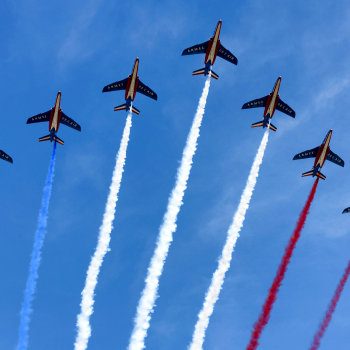 Jets above the Champs-Elysées in Paris on Bastille Day
Bastille Day is the common English name for France's National Day that is celebrated every year on July 14.

It marks the storming of the Bastille (a medieval fortress-turned-prison in Paris used by the king to imprison political opponents) on July 14, 1789, a major event in the course of the French Revolution, which led to the end of absolute monarchy, the introduction of constitutional monarchy and the birth of the French Republic. The storming of the Bastille became a symbol of freedom, democracy and the struggle against oppression for the French people and worldwide.

In French it is called fête nationale française (meaning "French National Celebration") or 14 juillet (meaning "the 14th of July").

It also commemorates the "Festival of the Federation" (in French Fête de la Fédération), held on the same day a year later, on July 14, 1790, on the Champ de Mars (now the location of the Eiffel Tower) that celebrated the revolution itself as well as national unity with great pomp.

Today Bastille Day is observed with a mix of military parades and parties and celebrations all over the country, with dancing and firework displays ending the day. The largest and most famous military parade takes place on the Champs-Élysées avenue in Paris in the morning of July 14, a meticulously planned spectacle watched by many dignitaries, including the French President, and often involving military personnel from many other countries allied with France.

The next occurrence of Bastille Day is marked in red.