What is Canada Day? 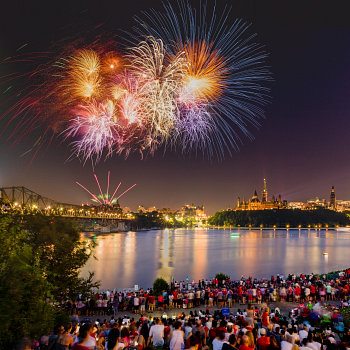 Fireworks over Ottawa on Canada Day
Canada Day is Canada's official National Day. It is a statutory public holiday in all provinces and territories in Canada and is celebrated annually on July 1.

It celebrates the joining, on July 1, 1867, of the British colonies of the Province of Canada, Nova Scotia and New Brunswick into a wider confederation of four provinces called Canada (with the colony of the Province of Canada being divided into the two provinces of Ontario and Quebec), but as a part of the British Empire known then as the Dominion of Canada. Though often informally referred to as "Canada's birthday", it was only one important milestone in the evolution of the country into its current form, with ten provinces and three territories.

It was called Dominion Day until 1982, when Canada became completely sovereign and the holiday was renamed to its current name. In French-speaking parts of Canada it is known as Fête du Canada.

While the date was not celebrated much initially (except for the Gold and Diamond Jubilees of the founding of the confederation in 1917 and 1927), celebrations started gaining more traction from the 1950s, and especially after Canada's centennial in 1967. Today Canada Day is a community-based celebration held all over the country in lots of different ways by different communities, with popular events such as free concerts, cultural displays, parades, carnivals and festivals, followed by fireworks in the evening, and also citizenship ceremonies to welcome new Canadian citizens. There are no set rules for what shape the celebrations should take.

The regulations for how Canada Day is observed if it falls on a Sunday differ between provinces/territories - some substitute the following Monday as a day off, others have no set rule. The celebrations themselves will generally still take place on July 1.

The next occurrence of Canada Day is marked in red.