What is Day of the Dead? 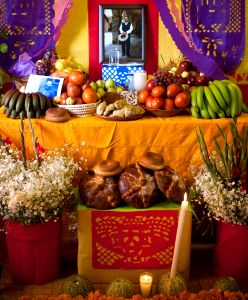 Traditional altar to commemorate a deceased relative on Day of the Dead
Day of the Dead ("Día de los Muertos") is a multi-day festival celebrated every year from October 31 to November 2 in commemoration of friends and family members who have died. It originated in Mexico, for which it has become a national symbol, and has now spread to many other countries, especially the United States and Latin America. It blends with the traditions and customs for honoring the dead in other nations and cultures.

In Latin and South American cultures the celebration of the dead is a custom that goes back thousands of years. Traditionally held during summer, upon the arrival of the Spanish it was gradually changed to coincide with the Christian celebrations of Hallowtide: Halloween (All Saints' Eve) on October 31, All Saints' Day on November 1 and All Souls' Day on November 2. It also coincides with the ancient Celtic seasonal festival to mark the end of the harvest and to remember the dead known as Samhain that is celebrated from sunset on October 31 to sunset on November 1.

Day of the Dead is often called Día de los Muertos in anglophone countries, even though the original name is Día de Muertos. 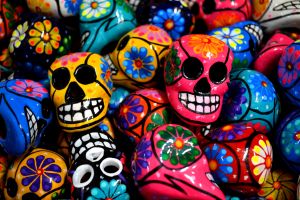 Mexican clay skulls on display for Day of the Dead 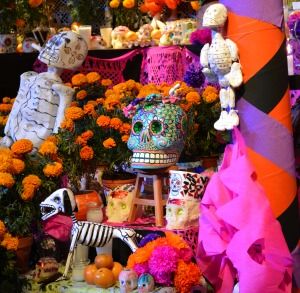 Altar dedicated to La Catrina, a female character representing the dead during Day of the Dead celebrations in Mexico

The next occurrence of Day of the Dead is marked in red.