Feast of the Assumption 2023


What is the Feast of the Assumption? 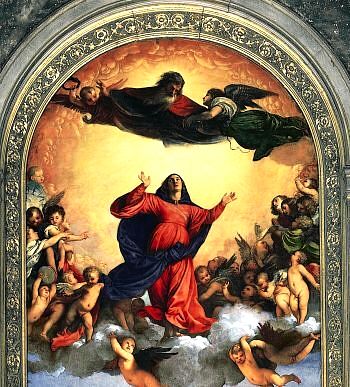 Assumption of the Virgin (section of an oil painting by Titian in the Frari church in Venice)
The Feast of the Assumption (also called Assumption of Mary into Heaven and often simply referred to as Assumption) is a Christian feast that marks the assumption (being taken up into heaven) of the Virgin Mary (the mother of Jesus Christ) at the end of her life. It is a holy day of obligation for Catholics that is celebrated annually on August 15.

Some people wrongly believe Mary actively "ascended" into heaven by her own power (in the same way as Jesus Christ), but this is not supported by the Bible. Instead, Mary was "assumed", meaning taken into heaven by God.

Catholics believe that not only Mary's soul, but also her body were received into heaven. They hold that the decaying of the human body after death is caused by the deceased's sins committed during life. Since Mary was sinless, it makes sense for her to have been assumed bodily.

Assumption Day is a very important day for the Catholic Church and for Catholics worldwide. It is one of the largest religious festivals and a public holiday in more than 40 countries. It is so important that it is called "summer Easter" in some countries, for example Greece.

To celebrate the day, popular festivals, colorful street processions, parades and spectacle accompany the religious Assumption festivities. The faithful attend mass, with the subject of the sermon usually being the Virgin Mary. Some services incorporate a blessing of the harvest. Despite the church never pointing to any tangible historical or explicit biblical support, and the Assumption not having been made dogma (declared an article of faith) until 1950, the holiday has not only endured but has prospered to this day, based on widespread belief and reverence.

The feast is also known as Dormition ("falling asleep", meaning death) or Feast of the Dormition in Eastern Christian churches.

When is the Feast of the Assumption 2024?

The next occurrence of the Feast of the Assumption is marked in red.