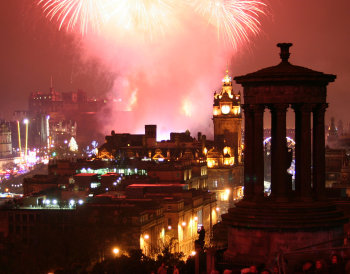 Fireworks over Edinburgh for Hogmanay
Hogmanay is the Scottish word for the last day of the year, usually called New Year's Eve. It refers to the Scottish way of celebrating New Year and is held annually on December 31.

While most countries celebrate New Year with parties, the Hogmanay celebrations in Scotland are something much more important and special. The celebrations generally usually last until well after midnight into January 1 (New Year's Day) and often even January 2, which is a public holiday in Scotland.

There are several additional traditions and customs linked with Hogmanay. The most widespread custom is first-footing which begins right after midnight. This involves being the first person to step through the door of a friend or neighbour, and giving a symbolic gift such as a coin for prosperity, a lump of coal for warmth, whisky for a small drink or a black bun (a rich fruit cake). Food and drink, as well as gifts, are then given to the guests. This can go on until the early hours of the morning and take up some of the next day; the current trend is for people to visit houses until January 3 or even further into January. First-footing is supposed to bring good luck to the owner of the house for the rest of the year. Dark-haired men are preferred as first-footers; this is thought to date back to the days of Viking invasions of Scotland, when the arrival of a blond stranger could be a sign of impending trouble.

Other customs during Hogmanay include the singing of "Auld Lang Syne" (which literally means "days gone by" or "for old time's sake"), a poem by Scottish poet Robert Burns. There are also many local celebrations, such as the fireball swinging in Stonehaven, torchlight processions, bathing in the icy sea or in rivers, and village walks led by musicians.

Hogmanay is part of a season of Scottish winter festivals that includes St. Andrew's Day on November 30 in honor of St. Andrew, the patron saint of Scotland, Hogmanay and Burns Night on January 25, the annual celebration of Scotland's national poet Robert Burns.

While "Hogmanay" is the spelling used most frequently these days, many other spellings exist, among them Hoghmanay, Hogmenay, Hugmanay, Hagman(a)e, Hogmana(e), Hagmonay, and a number of others. The origins of the word are unclear, it may have Gaelic or Norse roots, but is likely of French provenance; many different theories exist about its etymology.

The next occurrence of Hogmanay is marked in red.

Dates of Hogmanay 2023 and surrounding years as downloadable image file