What is Poppy Day? 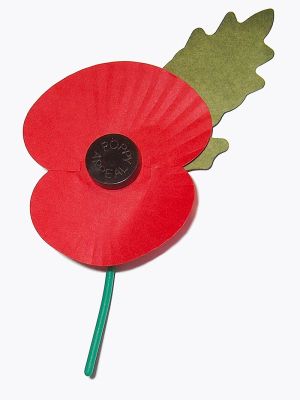 Remembrance poppy as worn on Poppy Day
Poppy Day is the informal name for Remembrance Day (Armistice Day) and is held annually on November 11.

It takes its name from the tradition of wearing a red remembrance poppy (an artificial corn poppy, made of plastic and cardboard by disabled ex-servicemen and sold by charities in support of war veterans) from late October until Remembrance Sunday. Originally worn to commemorate the fallen of the First World War, poppies are now also worn in memory of those who fell in every conflict since.

Wearing poppies to remember the war dead is inspired by the famous war memorial poem In Flanders' Fields by Canadian Lieutenant-Colonel John McCrae which ends with the line "We shall not sleep, though poppies grow, In Flanders fields".

The day is marked by holding a one- or two-minute silence at 11 am ("the eleventh hour of the eleventh day of the eleventh month"), the time and date in 1918 when the armistice became effective and World War I ended.

The next occurrence of Poppy Day is marked in red.