What is Remembrance Day? 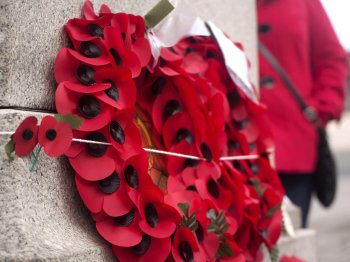 Poppy wreaths on Remembrance Day
Remembrance Day is a day of remembrance observed in Commonwealth member states since the end of World War I to honor members of the armed forces who fell in the line of duty. It is held every year on November 11.

The day is marked by holding a one- or two-minute silence at 11 am ("the eleventh hour of the eleventh day of the eleventh month"), the time and date in 1918 when the armistice (the formal agreement of the warring parties to stop fighting) became effective and World War I ended.

It should not to be confused with Remembrance Sunday. In the UK the main observance ceremonies are held on Remembrance Sunday (the second Sunday in November, the Sunday nearest to November 11), which occasionally falls on the same day as Remembrance Day.

The Red Poppy - the symbol of Remembrance Day
Remembrance Day is also known as Poppy Day due to the tradition of wearing remembrance poppies (artificial corn poppies made of plastic and cardboard by disabled ex-servicemen and sold by charities in support of war veterans) from late October until Remembrance Sunday.

Originally called Armistice Day immediately after the end of World War I, it is a public holiday in a number of countries, even though most have changed the name.

In the United States it is now known as Veterans Day and is a federal holiday. Its character has also changed: instead of honoring only the dead, Veterans Day remembers all those who have served in the United States Armed Forces. It was given its current name in 1954 at the urging of major U.S. veterans' organizations. The official national remembrance of those killed in action is Memorial Day, held annually on the last Monday of May, which predates World War I.

In Germany the day is not a public holiday as Germany's national day of mourning, called Volkstrauertag (German for "people's day of mourning"), is celebrated two Sundays before the first day of Advent, on the Sunday closest to November 16 (it falls in the period between 13 November and 19 November).

The next occurrence of Remembrance Day is marked in red.