What is Remembrance Sunday? 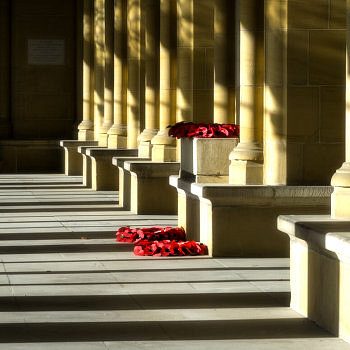 Remembrance Sunday is the day on which the main Remembrance Day observance ceremonies are held in the UK.

It is marked by ceremonies at local war memorials in most cities, towns and villages, attended by civic dignitaries, members of the Royal British Legion and other veterans' organisations, members of local armed forces units, military cadets, youth organisations (e.g. Scouts and Guides) and the public. Wreaths of remembrance poppies (see Poppy Day) are laid on the memorials, and two minutes' silence is held at 11am ("the eleventh hour of the eleventh day of the eleventh month"), the time on November 11, 1918 when the armistice became effective and World War I ended. Church bells are usually rung half-muffled, creating a sombre effect. The overall ceremony, including parades, memorial service and wreath-laying, can last up to two hours.

Remembrance Sunday is not the same as Remembrance Day (also known as Armistice Day), the day of remembrance observed in Commonwealth member states since the end of World War I to honor members of the armed forces who fell in the line of duty and which is held every year on November 11 (even though occasionally both fall on the same day).

During World War II, the Remembrance Day commemorations in the UK were moved to the Sunday preceding November 11 as an emergency measure to avoid disruption of the production of vital war materials. After the war, it was decided that the second Sunday in November should be named Remembrance Sunday in commemoration of both World Wars, as continuing with the date of November 11 would focus more on World War I and downplay the importance of World War II.

When is Remembrance Sunday 2024?

The next occurrence of Remembrance Sunday is marked in red.