What is Star Wars Day? 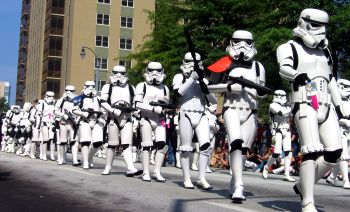 The saying is said to have first been used in a newspaper advertisement on May 4, 1979, to congratulate Margaret Thatcher on the day she took office as Prime Minister of the United Kingdom. The advertisement was placed by her political party, the Conservatives, with the text "May the Fourth Be with You, Maggie. Congratulations.". It was also used in a defence debate in the UK parliament on May 4th, 1994.

The Walt Disney Company, which bought Lucasfilm and the rights to the Star Wars franchise in 2012, now officially observes Star Wars Day with events and festivities in its theme parks Disneyland and Walt Disney World.

The next occurrence of Star Wars Day is marked in red.