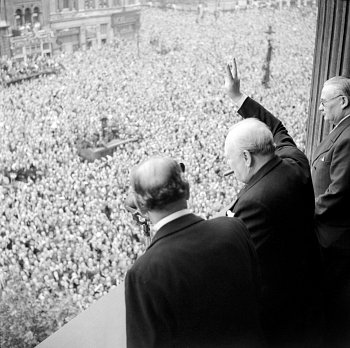 Winston Churchill waves to crowds in London on VE Day, May 8, 1945
VE Day celebrates the end of the World War II in Europe and is held every year on May 8. It is the abreviated form of Victory in Europe Day and is used much more commonly.

The unconditional surrender of all German forces was formally agreed on 7 May. The time for the cessation of all hostilities in Europe was set for May 8, 11:01 p.m., marking the official end of World War II in Europe. By this time it was already May 9 in eastern Europe, and thus several former Soviet bloc countries (Russia, Belarus and some of the successor states of former Yugoslavia, such as Serbia) celebrate Victory Day on May 9.

Upon the announcement of Germany's surrender and the cessation of hostilities, celebrations erupted throughout the Western world, especially in the United Kingdom and in North America. Several countries observe public holidays on May 8, under names such as Victory Over Fascism Day, Liberation Day or Victory Day (though not the UK and the US).

The next occurrence of VE Day is marked in red.