What is April Fools' Day? 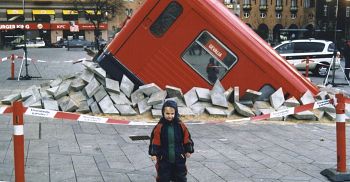 An April Fools Day joke making fun of Copenhagen's new subway, suggesting a train had broken through the surface in front of the town hall.
April Fools' Day, also known as All Fools' Day, is observed every year on the first day of April by playing harmless pranks on unsuspecting recipients and spreading hoaxes. The pranks as well as the victims themselves are called April fools. Shouting "April Fool" at the victim of the joke usually serves as the resolution of the prank. Many newspapers, radio and TV stations and other media outlets take part in the tradition by publishing practical jokes, mostly spectacular stories, narratives or information. They contain subtle clues that the story is a hoax and are usually resolved the next day. It is a generally accepted custom that the pranks should not be harmful and have to cease by noon. The tradition of All Fools' Day exists in North America as well as in most European countries. April Fools' Day is not a public holiday in any country where it is practiced and there are no vacations from work or school.

In one of the most famous April Fools' Day jokes, broadcast on the BBC current affairs program Panorama on April 1, 1957, farmers were shown picking spaghetti from "spaghetti trees" during the "spaghetti harvest" in Switzerland. The BBC subsequently received a number of inquiries about the program from people requesting further information about spaghetti cultivation and how to grow spaghetti trees.

The next occurrence of April Fools' Day is marked in red.