What is Christmas Eve? 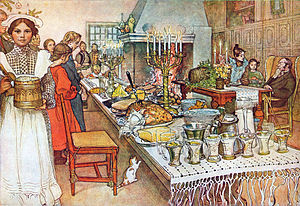 Christmas Eve, a 190405 watercolor painting by Carl Larsson
Christmas Eve refers to the evening or entire day preceding Christmas Day, the main day of Christmas, a widely celebrated festival commemorating the birth of Jesus of Nazareth that takes place on December 25. It is a culturally significant celebration for most of the Western world and is widely observed as a full or partial holiday in anticipation of Christmas Day. It is also the beginning of Christmastide, which begins at sunset or Vespers (sunset evening prayer service, also known as evensong) on Christmas Eve.

One reason celebrations occur on Christmas Eve is because the traditional Christian liturgical day starts at sunset, an inheritance from Jewish tradition. This liturgical day is followed for all days in the Eastern rite[8] and the custom of beginning Christmas celebration (as well as Sunday and the other major festivals) in the preceding evening is preserved in western Churches that have altered the liturgical day to start at midnight, for example the Roman Catholic Church. Many churches still ring their church bells and hold prayers in the evening before holidays.

Since Christian tradition holds that Jesus was born at night, Midnight Mass is celebrated on Christmas Eve, traditionally at midnight, in commemoration of his birth. The idea of Jesus being born at night is reflected in the fact that Christmas Eve is referred to as "Heilige Nacht" ("Holy Night") in German, "Nochebuena" ("the Good Night") in Spanish and similarly in other expressions of Christmas spirituality, such as the song "Silent Night, Holy Night".

The next occurrence of Christmas Eve is marked in red.

DISCLAIMER: While every effort has been made to ensure the accuracy of the data on this site, we cannot accept responsibility for any mistakes which may occur. Data provided 'as is' without warranty and subject to error and change without notice. Your use of this website indicates acceptance of the Terms of Use. Please contact us for commercial use of our calendars, suggestions for improvement, mistakes found in the calendars and any other concerns. All content of this website is copyright © 2011-2021 Calendarpedia®. All rights reserved. Calendarpedia® is a registered trade mark. Privacy policy  ·  Change consent  ·  Sitemap / archive.