What is Martin Luther King Day? 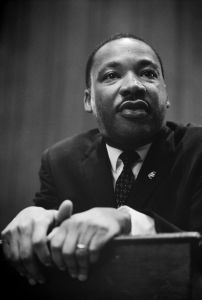 Dr. Martin Luther King, Jr.
Martin Luther King Day (also known as King Day, MLK Day or Martin Luther King Jr. Day) is a United States federal holiday celebrated annually on the third Monday of January. In some states it is also commonly referred to as "Civil Rights Day" or "Human Rights Day". In recent years it is increasingly seen to be a 'Day of Service' when Americans are encouraged to volunteer to help others less fortunate than themselves.

King was hugely influential in the American Civil Rights Movement (despite never holding public office) and was a major advocate of non-violent activism in the struggle for the end of racial discrimination under US law. He was assassinated in 1968.

The federal holiday in King's honor was created in 1983, during the presidency of Ronald Reagan, and first observed in January 1986.

The next occurrence of Martin Luther King Day is marked in red.


DISCLAIMER: While every effort has been made to ensure the accuracy of the data on this site, we cannot accept responsibility for any mistakes which may occur. Data provided 'as is' without warranty and subject to error and change without notice. Your use of this website indicates acceptance of the Terms of Use. Please contact us for commercial use of our calendars, suggestions for improvement, mistakes found in the calendars and any other concerns. All content of this website is copyright © 2011-2020 Calendarpedia®. All rights reserved. Calendarpedia® is a registered trade mark. Privacy policy  ·  Change consent  ·  Sitemap / archive. This server's date and time: Oct 20 2020, 1:51pm PDT