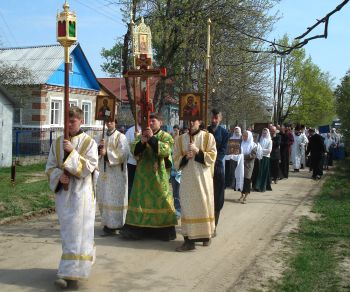 Pascha procession in Russia
Pascha (Greek, a transliteration of the Hebrew word pesach, meaning Passover) is the name used for Orthodox Easter in Eastern Christianity. It is the oldest and most important festival in the Orthodox Christian church, celebrating Jesus Christ's resurrection from the dead (by rising from the grave) following his crucifixion. It is also called Resurrection Day or Resurrection Sunday.

Pascha is a moveable feast, which means that its date is not fixed in the calendar and it falls on a different date each year (the date is determined by a set of rules called the Paschalion). In most years the date differs from the date of Easter in Western Christianity (catholic and protestant Easter). It is usually one week, but occasionally four or five weeks, later - but in some years it falls on the same date. For details see this comparison table of the dates of Western Easter and Pascha/Orthodox Easter.

The next occurrence of Pascha is marked in red.


DISCLAIMER: While every effort has been made to ensure the accuracy of the data on this site, we cannot accept responsibility for any mistakes which may occur. Data is provided 'as is' without warranty and is subject to error and change without notice. Your use of this website indicates acceptance of the Terms of Use. Please contact us for commercial use of our calendars, suggestions and ideas for improvement, mistakes found in the calendars and any other concerns. Privacy policy. All content of this website is copyright © 2011-2020 Calendarpedia®. All rights reserved. Calendarpedia® is a registered trade mark. Sitemap. This server's date and time: Aug 3 2020, 2:38am PDT