What is Whit Sunday? 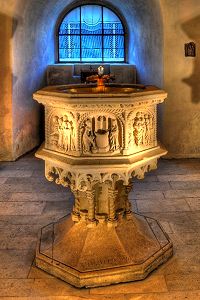 A baptismal font. Baptisms are often held on Whit Sunday.
Whit Sunday, also referred to as Whitsunday, Whitsun or simply Whit (meaning "White Sunday", as white garments were worn by those newly baptized on this day), is the name used mostly in the United Kingtom for the annual Christian festival commemorating the descent of the Holy Spirit on the disciples of Jesus after his ascension from earth to heaven on Ascension Day. It is celebrated on the seventh Sunday after Easter. Outside the UK Whit Sunday is known as Pentecost, meaning "fiftieth day", as it is held on the 50th day from the beginning of the Easter season on Easter Sunday (including Easter Sunday in the counting). Some Christian denominations consider it to be the birthday of the Christian church and celebrate it as such. It can fall as early as May 10th and as late as June 13th.

Whit Sunday is followed by Whit Monday (Pentecost Monday, considered to be "the second day of Pentecost"), a public holiday in many countries with Christian traditions. It was the start of a week (especially the first three days) of festivities called Whitsuntide (or Whitweek), which has now largely disappeared.

The next occurrence of Whit Sunday is marked in red.


DISCLAIMER: While every effort has been made to ensure the accuracy of the data on this site, we cannot accept responsibility for any mistakes which may occur. Data is provided 'as is' without warranty and is subject to error and change without notice. Your use of this website indicates acceptance of the Terms of Use. Please contact us for commercial use of our calendars, suggestions and ideas for improvement, mistakes found in the calendars and any other concerns. Privacy policy. All content of this website is copyright © 2011-2020 Calendarpedia®. All rights reserved. Calendarpedia® is a registered trade mark. Sitemap. This server's date and time: Aug 11 2020, 9:23am PDT