What is All Hallows' Eve? 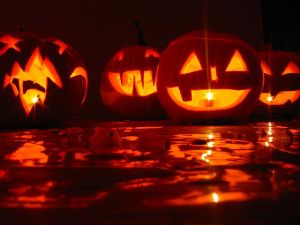 Carved pumpkins on All Hallows' Eve
All Hallows' Eve, nowadays usually called Halloween, is a celebration in remembrance of the dead that occurs annually on the evening of October 31. The name is a short form of All Hallows' Evening, meaning All Saints' Evening, as it is celebrated on the evening before All Hallows' Day, nowadays usually called All Saints' Day (in the same way as Christmas Eve is the name of the day before Christmas Day). Saints have historically been known as hallows, derived from the Old English word hālig and related to the German word heilig, meaning holy. Eventually, the name All Hallows' Eve was contracted to Hallowe'en and then simplified even further to Halloween, the form in common use today.

All Hallows' Eve is a mixture of customs of pagan and Christian origins. It originated from an ancient Celtic seasonal festival to mark the end of the harvest and to remember the dead (known as Samhain) that is celebrated from sunset on October 31 to sunset on November 1.

While not an official holiday, All Hallows' Eve is observed in a number of countries around the world, primarily in the West (North America and Europe) but also increasingly in Asian countries, as it provides commercial opportunities. In the United States, it is estimated to be the festival with the second-highest amount of consumer spending after Christmas.

All Hallows' Eve is followed by All Saints' Day (for which it is the vigil) on November 1 and All Souls' Day on November 2. Together the three days of remembrance of the dead form the triduum (a religious observance lasting three days) of Hallowtide. People traditionally visit the graves of deceased relatives during this time. It is related to the Mexican holiday Day of the Dead.

The next occurrence of All Hallows' Eve is marked in red.

DISCLAIMER: While every effort has been made to ensure the accuracy of the data on this site, we cannot accept responsibility for any mistakes which may occur. Data provided 'as is' without warranty and subject to error and change without notice. Your use of this website indicates acceptance of the Terms of Use. Please contact us for commercial use of our calendars, suggestions for improvement, mistakes found in the calendars and any other concerns. All content of this website is copyright © 2011-2021 Calendarpedia®. All rights reserved. Calendarpedia® is a registered trade mark. Privacy policy  ·  Change consent  ·  Sitemap / archive. This server's date and time: Jan 25 2021, 2:49pm PST