What is Easter Week? 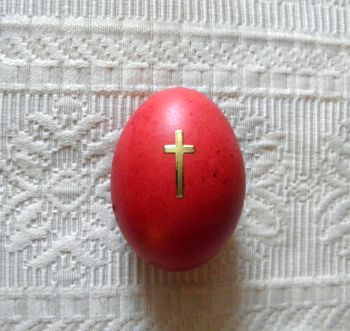 Red Easter egg with cross, displayed during Easter Week. Eggs are traditionally eaten at Easter as they symbolize the empty tomb of Jesus. The red color symbolizes his blood shed during the crucifixion.
Easter Week is the period of seven days from Easter Sunday through to the following Saturday (Easter Saturday). In the Latin Rite of Roman Catholicism, Anglican and other Western churches, Easter Week is the week beginning with the Christian feast of Easter and ending a week later on Easter Saturday. The term is sometimes inaccurately used to mean the week before Easter, which is properly known as Holy Week, and particularly confusing in this context is the secular usage of the term Easter Saturday to refer to the day known liturgically as Holy Saturday or Easter Eve (the day before Easter), rather than the Saturday following Easter.

In former years, Easter, as the most important celebration in Christianity, was observed for a week, and it still is celebrated in the liturgy of the Roman Catholic Church and Anglicanism with an octave (referring to a period of eight days), the Octave of Easter, which includes the Sunday after Easter Saturday.

In Eastern Christianity Easter Week is referred to as Bright Week.

The next occurrence of Easter Week is marked in red.


DISCLAIMER: While every effort has been made to ensure the accuracy of the data on this site, we cannot accept responsibility for any mistakes which may occur. Data provided 'as is' without warranty and subject to error and change without notice. Your use of this website indicates acceptance of the Terms of Use. Please contact us for commercial use of our calendars, suggestions for improvement, mistakes found in the calendars and any other concerns. All content of this website is copyright © 2011-2020 Calendarpedia®. All rights reserved. Calendarpedia® is a registered trade mark. Privacy policy  ·  Change consent  ·  Sitemap / archive. This server's date and time: Sep 26 2020, 9:13pm PDT