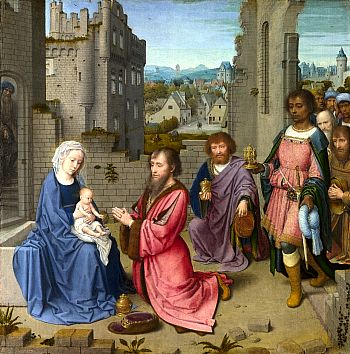 Adoration of the Kings, by Gerard David. National Gallery, London
Epiphany is a Christian feast day celebrated annually on January 6 that is also known as Three Kings Day and Theophany. Epiphany means "manifestation" as it commemorates the first time Jesus' divinity manifested itself through the visit of the Three Kings (also known as the Magi or Wise Men) and through his baptism in the river Jordan. It is a significant event in the church calendar as the celebration of the Baptism of Jesus.

Epiphany is the starting day of Epiphanytide (the Epiphany season), the liturgical period that follows Christmastide (the Christmas season) and continues until Ash Wednesday and the beginning of Lent (the Lenten season). It is preceded by Epiphany Eve on January 5.

Many churches celebrate Epiphany on the Sunday before or after, especially in countries where Epiphany is not a public holiday.

So-called "king cakes", named after the three biblical kings, are eaten on Epiphany and during the following Epiphany season up until Fat Tuesday.

The next occurrence of Epiphany is marked in red.

Dates of Epiphany 2024 and surrounding years as downloadable image file 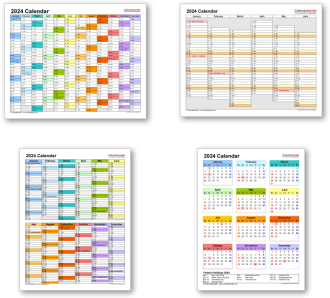 A selection of downloadable, printable calendar templates for 2024 with US federal holidays, suitable for a variety of applications. Available for Word, Excel and PDF.