What is Ash Wednesday? 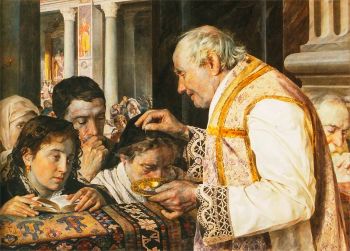 Ashes are sprinkled on the top of the head in this 1881 Polish painting.
Ash Wednesday is a Christian religious holiday that is observed every year 46 days before Easter. It is the first day of the Lenten season (see Lent), a time of fasting and abstinence, penitence and prayer for observant Christians. It falls on a different date each year because it is determined by the date of Easter Sunday. It can occur as early as February 4 or as late as March 10.

It derives its name from the practice of ceremonially making an ashen cross on the foreheads or placing ashes on the heads of adherents as a symbol of mourning and repentance to God. The words "Remember that you are dust, and to dust you shall return" or similar are said during the ceremony. Special church services are held for this, often in the evening of Ash Wednesday. The ashes used are typically gathered after the blessed palm fronds (which are a symbol of victory, triumph, peace and eternal life) from the previous year's Palm Sunday service have been burned on Shrove Tuesday.

Ash Wednesday falls on the day after Shrove Tuesday (also known as Fat Tuesday and Pancake Day), the last day of feasting and indulging in rich foods that one might give up as a sacrifice for the upcoming 40 days of the Lenten season. It occurs just after the excesses of two days of Carnival, which are celebrated in regions of Latin America and the Caribbean as well as Northern Europe. Some observant Christians conduct a full fast (complete fast or bread and water fast) during daytime on Ash Wednesday (and also on Good Friday) and only break the fast at sunset. A few continue fasting all through Lent.

It is a national public holiday in some countries (eg. Jamaica, Cayman Islands), a holiday for bank and/or government workers and some businesses in others (eg. Guadeloupe, Panama), and not a public holiday in the United States, Canada, Australia, the United Kingdom and other European countries (though some local observances may be held).

Why does the date of Ash Wednesday change every year?

Ash Wednesday depends on the date of Easter Sunday. Easter is a 'movable feast', which means that its date is not fixed in the calendar, but is instead calculated according to the lunar calendar, formalised in Ecclesiastical date tables. It is based on the date of the vernal equinox (March equinox). In AD 325 the Council of Nicaea decreed that Easter always falls on the first Sunday after the first full moon that occurs on or after the vernal equinox. The date of Easter Sunday can thus fall between March 22 and April 25, with Ash Wednesday occurring 46 days before this date (consisting of 40 days of fasting and six Sundays counted as feast days, for a total of 46 days for Lent).

In Eastern Christianity Lent starts on Clean Monday (also called Pure Monday, Monday of Lent or Green Monday), the 6th Monday before Palm Sunday. It is sometimes referred to as Ash Monday by analogy with Ash Wednesday, even though only few Eastern Churches practice the imposition of ashes.

The next occurrence of Ash Wednesday is marked in red.