What is Shrove Tuesday? 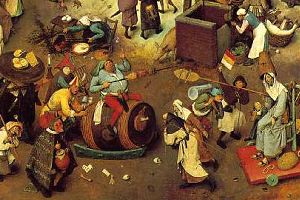 The Fight Between Carnival and Lent by Pieter Bruegel the Elder, 1559 (detail)
Shrove Tuesday, also called Pancake Day, Pancake Tuesday, Fat Tuesday and Mardi Gras (which is French for "Fat Tuesday"), is the last day of feasting before Lent begins on Ash Wednesday. Shrove Tuesday is a moveable feast whose date whose date is linked to Easter, so it changes on an annual basis. The date can vary from as early as February 3 to as late as March 9. It is preceded by Shrove Monday and marks the end of Shrovetide, also known as the Pre-Lenten Season.

Shrove Tuesday is observed mainly in English-speaking countries, especially Ireland, the United Kingdom, Australia, New Zealand, Canada and the United States, but also in the Philippines and Germany.

The next occurrence of Shrove Tuesday is marked in red.