What is Fat Tuesday? 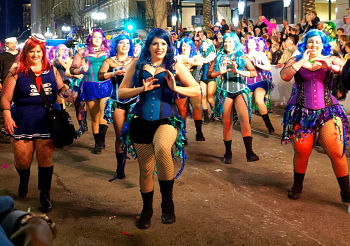 Fat Tuesday is a moveable feast whose date is determined by Easter, and it's celebrated exactly 47 days before Easter Sunday. The date can vary from as early as February 3 to as late as March 9.

While there are carnival festivals in many countries on Fat Tuesday, in the English-speaking world the term is particularly associated with the "Mardi Gras" carnival celebrations in New Orleans, Louisiana, USA. Recently the term "Mardi Gras" has evolved to refer to the whole period of festivities, not just the single day of Mardi Gras/Fat Tuesday.

The next occurrence of Fat Tuesday is marked in red.


DISCLAIMER: While every effort has been made to ensure the accuracy of the data on this site, we cannot accept responsibility for any mistakes which may occur. Data provided 'as is' without warranty and subject to error and change without notice. Your use of this website indicates acceptance of the Terms of Use. Please contact us for commercial use of our calendars, suggestions for improvement, mistakes found in the calendars and any other concerns. All content of this website is copyright © 2011-2020 Calendarpedia®. All rights reserved. Calendarpedia® is a registered trade mark. Privacy policy  ·  Change consent  ·  Sitemap / archive. This server's date and time: Oct 20 2020, 1:56pm PDT