Lent 2023 starts on Wednesday, February 22, 2023 (in 15 days) and ends on Saturday, April 8th 2023 (in 59 days).  Calendar for 2023
Please note: There are different definitions for the duration of Lent. For details see the explanations below.
Sponsored links 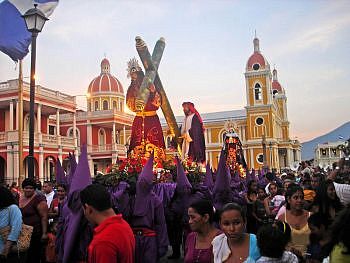 Lent celebrants participating in a street procession during Holy Week.
Lent, or the Lenten season, is the annual period of Christian observance that precedes Easter. The dates of Lent are defined by the date of Easter, which is a movable feast, meaning that it falls on a different date each year. Lent starts on Ash Wednesday and its observance (although not its liturgical period, as Sundays are not fast days and are therefore not counted  see below) lasts for 40 days, mirroring the 40 days that Jesus spent fasting in the wilderness before starting his ministry. It can also be seen to mirror the 40 hours that Jesus spent in the tomb prior to his resurrection.

Lent is a penitential period, involving the dual disciplines of abstinence and fasting. During Lent many Christians commit to fasting or giving up certain foods, habits or luxuries - for example meat, cakes and sweets, alcohol, smoking - for its duration (the money saved is often then donated to charity). This is done both as a form of penitence and as a spiritual tool to tame the body and 'sharpen the spirit' for prayer, reflection and contemplation in preparation for the celebration of Easter.

Lent lasts for 40 days and the first day is always Ash Wednesday (the day after Shrove Tuesday). Nevertheless, there is often confusion as to when Lent ends! This is partly due to the fact that there are in fact always 46 days between Ash Wednesday and Easter Sunday, and partly due to confusion between the period of the Lenten fast and the liturgical 'season' or period of Lent.

The Lenten Fast (which is the period that most people consider to be 'Lent') starts on Ash Wednesday and ends on Holy Saturday (not to be confused with Easter Saturday, the Saturday after Easter). This is a period of 46 days. However, the six Sundays within the period are not fast days (Sundays are always feast days in the Christian calendar) and therefore not counted in the 40 days of Lent.

The liturgical period of Lent also begins on Ash Wednesday, however it ends on the evening of Holy Thursday (Maundy Thursday). In addition, Palm Sunday (or alternatively the day before Palm Sunday) is sometimes considered to be the last day of Lent. This is incorrect and based on a misunderstanding about the liturgical periods of Lent and Holy Week. They are not exclusive of each other, and Lent in fact continues into Holy Week (see above), meaning that the liturgical season of Lent ends on Holy Thursday.

Purple is the color most associated with Lent - during this period purple church vestments (altar cloths and the priests' liturgical garments) are used. The purple is symbolic in two ways: it is the traditional color of mourning (recalling Jesus' death) and also symbolic of royalty (celebrating Christ's coming as King).

In Eastern Orthodox Christianity Lent is called 'Great Lent' and is the most important fasting period of the year, in preparation for the most important celebration of the year, Pascha (Orthodox Easter Sunday). As in Western Christianity, the period of Lent differs in its dates from year to year, with the dates defined by the date of Pascha, which is a movable feast. Great Lent begins on Clean Monday (the beginning of the 7th week before Pascha) and runs for 40 days (including Sundays) until Lazarus Saturday (the day before Palm Sunday). Fasting continues until the morning of Pascha.

In Eastern Christianity Lent starts on Clean Monday (also called Pure Monday, Monday of Lent or Green Monday), the 6th Monday before Palm Sunday. It is sometimes referred to as Ash Monday by analogy with Ash Wednesday, even though only few Eastern Churches practice the imposition of ashes.

The next occurrence of Lent is marked in red.

Dates of Lent 2023 and surrounding years as downloadable image file