What is Memorial Day? 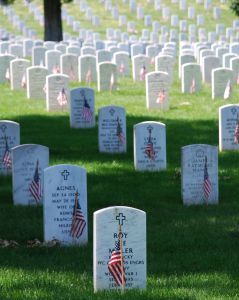 Memorial Day decorations at Arlington National Cemetery, Washington, D.C.
Memorial Day is a United States federal holiday that commemorates those who have died in military service to their country. It is observed annually on the last Monday of May. It can occur on calendar dates between May 25 and May 31.

Created in 1868 in the aftermath of the American Civil War as a step towards national reconciliation, it was originally known as Decoration Day - an occasion to decorate the graves of soldiers who had died during the war. After World War I its meaning evolved to include all American military personnel who died in any war while performing U.S. military service. The name "Memorial Day" gradually became more common than "Decoration Day", but was only declared the official name by federal law in 1967.

Until 1970 it was observed on May 30, regardless of the day of the week on which it occurred. The Uniform Monday Holiday Act of 1968 declared Memorial Day a federal holiday and moved four holidays, including Memorial Day, from their traditional dates to a specified Monday in order to create convenient three-day weekends, ending with the holiday. The change became effective in 1971.

The long weekend created by Memorial Day is generally seen to mark the unofficial beginning of the summer season (while the Labor Day long weekend in early September marks the end).

Observances are held at military graveyards, cemeteries and memorials, and thousands of military-themed parades are held across the country, frequently including members of veterans' organizations and military personnel and featuring marching bands and military vehicles. War graves are decorated with flowers, small flags and wreathes to honor fallen heroes.

A common tradition on the day is for the American flag to be swiftly hoisted to the top of the staff before being solemnly lowered to half-staff, where it remains until noon. It is then raised again to full-staff and remains there for the rest of the day. The lowering of the flag to half-staff is meant to honor the fallen, while the re-raising symbolizes the will of the living to continue the fight for freedom so that the nation's heroes will not have died in vain.

As Memorial Day is a federal holiday, federal employees are granted a day off, all non-essential government offices are closed, as are many schools, businesses and other organizations. Shops are closed or have limited opening hours.

The Memorial Day weekend has become an occasion for family get-togethers, visits to friends, events and short vacations. The parades are followed by fireworks, picnics, parties and BBQs. It has become a busy travel weekend, leading to congestion on highways and in airports. The holiday is also associated with the Indianapolis 500 car race, which is held on the Sunday preceding Memorial Day.

As the day has become less of an occasion of remembrance in recent years, its original meaning is in danger of becoming lost. To counter this, the National Moment of Remembrance was created in 2000 - an annual event that invites all Americans to pause for the duration of one minute at 3:00 p.m. local time on Memorial Day to honor those who have lost their lives while serving the country.

Memorial Day is not to be confused with Veterans Day (November 11) which honors and remembers all those who have previously served in the United States Armed Forces, and Armed Forces Day (third Saturday in May), an unofficial holiday that honors those currently serving in the armed forces.

Memorial Day is preceded by National Poppy Day, which is held on the Friday before the Memorial Day weekend. The red poppy is the official flower and symbol of Memorial Day and the national emblem of remembrance.

Other countries commemorate their war dead on November 11. The holiday takes different names - in the UK, Canada and a number of Commonwealth States it is referred to as Remembrance Day, while in France it is called Armistice Day. This custom is different in the US because Memorial Day predates Veterans Day.

The next occurrence of Memorial Day is marked in red.