What is Black Friday? 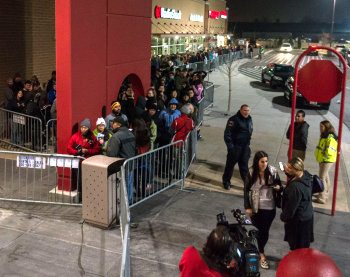 Large crowds start queuing before dawn in front of shops on Black Friday
Black Friday is the informal name used to mark the beginning of the Christmas shopping season. Black Friday follows Thanksgiving Day, a national holiday in the United States celebrated annually on the fourth Thursday of November, and always falls between November 23 and November 29.

In recent years Black Friday has become the busiest shopping day (for in-store foot traffic) of the year in the United States. Many retailers offer large discounts to entice shoppers into stores and start off the shopping season. It is routinely the day with the highest retail turnover of the year and an important indicator for the Christmas business. While it is not an official holiday, many non-retail employees and schools have both Thanksgiving Day and Black Friday off, which, together with the regular weekend that follows, creates a four-day long weekend.

Historically, "Black Friday" is used as a term for often catastrophic events that happened on a Friday. See this list of Black Fridays through history.

The next occurrence of Black Friday is marked in red.


DISCLAIMER: While every effort has been made to ensure the accuracy of the data on this site, we cannot accept responsibility for any mistakes which may occur. Data is provided 'as is' without warranty and is subject to error and change without notice. Your use of this website indicates acceptance of the Terms of Use. Please contact us for commercial use of our calendars, suggestions and ideas for improvement, mistakes found in the calendars and any other concerns. Privacy policy. All content of this website is copyright © 2011-2020 Calendarpedia®. All rights reserved. Calendarpedia® is a registered trade mark. Sitemap. This server's date and time: Aug 11 2020, 8:54am PDT