The December solstice 2022 is on Wednesday, December 21, 2022 (in 16 days).  Calendar for 2022
Please note: The dates given on this page are based on Coordinated Universal Time (UTC), which for practical purposes is equivalent to Greenwich Mean Time (GMT). While the December solstice occurs at the same moment in time all over the world, the date and local time differ from location to location depending on a location's time zone. For more details see the explanations below.


What is the December solstice? 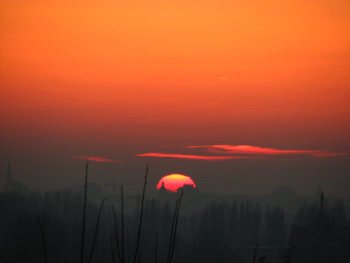 Sunset on the day of the December solstice
The December solstice, also known as southern solstice and Midwinter, is the moment in time when the Sun reaches its southernmost position in the sky as seen from Earth. In the Northern Hemisphere (North and Central America, Europe, Northern Africa, Asia) it is the winter solstice, while in the Southern Hemisphere (South America, Southern Africa, Australia and New Zealand) it is the summer solstice.

The December solstice occurs every year between December 20 and December 23. The dates given on this page are based on Coordinated Universal Time (UTC), which for practical purposes is equivalent to Greenwich Mean Time (GMT - the time zone of the United Kingdom). While the December solstice occurs at the same moment in time all over the world, the date and local time differ from place to place depending on the year and a location's time zone. For locations that are ahead of UTC (further east) it may fall on the day after, and for locations that are behind UTC (further west) it may fall on the day before. To find out the exact date and time of the December solstice 2022 in your area use this seasons calculator.

The December solstice marks the last day of autumn (fall)and the first day of winter in the Northern Hemisphere and the last day of spring and the first day of summer in the Southern Hemisphere. It is one of four days (two equinoxes and two solstices) throughout the year that mark the beginning of a new season. The other days are the March equinox, the June solstice and the September equinox.

When is the December solstice 2023?

The next occurrence of the December solstice is marked in red.